A Conversation with December Person of Interest: Steve Shook - The Bend Magazine 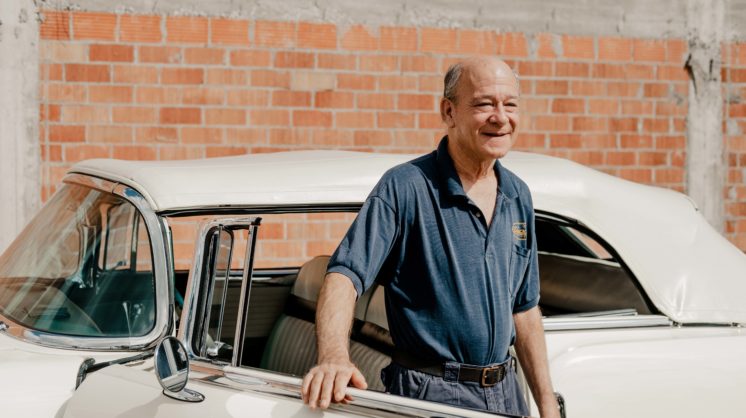 KC: Most people might not know Shook Enterprises actually started in your garage. Tell us a bit about the shop’s origin story.

SS: Well, I got married in the summer of ’72, and my wife and I headed off in a ’59 Volkswagen van named Alice for three months. We were going to wander our way up to Canada, but Alice had other plans with mechanical issues, so instead, we ended up in Montana. We came back [to Corpus], found some jobs, and found a place to live—with a garage, because I had a ’53 MG TD, and still have, to put in it. I had the MG through high school, and I couldn’t afford to fix it, so I learned how to keep it running. I wasn’t real enthusiastic about the job I was working, so I started working on other people’s cars in that garage. Then it got busy, and the ball continued to roll.

KC: So, you eventually moved into your current location, where you’ve been for the last 45 years, and have since become a staple in the downtown community. What does that mean to you and what would you say the secret to the shop’s longevity is?

SS: Customers kept finding me, and I was starting to push the limits of the neighbors’ goodwill, so I started looking for a bigger place. At the time, no one wanted to be downtown. Downtown was almost deserted and looked pretty grim, but I found a really old (120 years), but sturdy building that was slated to be torn down—and in 1976, Shook Enterprises was born. It was a difficult birth since it was full of 14-foot-high plaster walls throughout that had to be demolished, but we eventually got it into working order.

Since then, downtown and our business have been in a steady upswing, [especially as] new businesses and people make their way down here. We have always tried to give our customers a little extra for their money and have tried to pay attention to the small details. Plus, we have been very fortunate to have wonderful customers throughout the years. They are more like friends than customers.

KC: What is something people would be surprised to know about fixing classic cars?

SS: People think classic cars require special skills and knowledge, but if you think about it, the technology of a 50- to 100-year-old car is very simple, almost primitive. The only thing about a classic is they require much more attention to the small details. Also, everything on them was built by hand, so most parts can actually still be made.

KC: What are some of the most memorable cars you’ve seen come through the shop?

SS: We have worked on Ferrari, Lamborghini, Rolls Royce, Bentley, Auburn, Cord, and many other memorable cars. [Some] that stick out are the ’61 Apollo GT’s, my ’58 Porsche 356 Speedster, a ’52 Jaguar XK120 and a one-off Murphy bodied Hudson.

KC: What is your favorite part of working and living in the Coastal Bend?

SS: My family has been in Corpus Christi since 1957. I like the small town feel and the leisurely pace of life here. Add in the beach, the waterfront, the big sky, and the good folks; I don’t think there are many places better to live and do business.

KC: What do you drive on a regular basis and what’s your all-time dream car?

SS: I drive an older Toyota Tacoma pickup daily. I also test drive an amazing variety of cars that come through our doors. My dream cars in the earlier days were the ’58 Porsche Speedster and a ’52 Jaguar XK120, both of which I was able to purchase. Then I became fascinated with the Apollo 3500 GT.