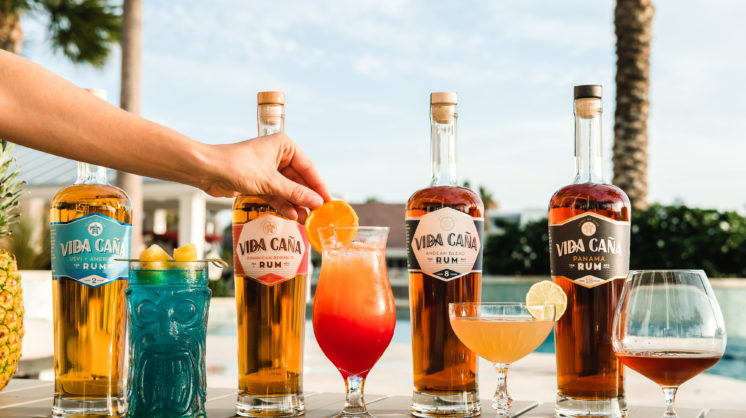 When Bryan Tierce and Jonathan Fuller got a sip of the good life, it would’ve been unfair had they not brought some of it back in a bottle. With the purest extractions from sugar canes down in the Dominican Republic, Andes, Panama, and some parts of the U.S., Vida Caña Rum is a varied series carefully curated to the sit-back, slow-down moments of life.
The cane life, or la vida caña, embodies a lot more than what meets the taste buds. “We want this to contribute to a certain lifestyle,” Tierce explains as he takes a sip of the rum he has helped craft. “We’re wanting to take the consumers on a journey.”
On such a journey, the two found multiple destinations; from the USVI + American Craft, a blend of two years, to the Panama, aged 18 years, each encompassing a different vibe for the evening. The four different rums in the series carry both fine and specific details for a tour you’ll want to take your time sipping through.
The “Spirit of Slow” – you’ll find with their brand, is represented by the sea turtle – an omen that represents the underrated bliss of just letting things flow. Both literally and metaphorically, this weaves into the rum’s meaning and business model. Through trial and error, the big reveal of the final product was worth the five-year process it endured.
“It ends up being blended towards the style we want,” Fuller says. “Which leaves us tasting and
confirming a lot of rums, probably hundreds of rums. And the one thing you do learn about rum
is that you know very little.”
Friends of nearly 20 years with surf trips, travel, and sunset-sipping under their belts, Tierce and Fuller have been working on every detail of Vida Caña Rum for five years, recreating the vacation aura in beverage format. In fact, the decision to create a rum company came to the now co-owners during an important board meeting.
“‘Board meetings,’ we called them – days filled with surf, siestas, and sea turtles,” they mention as a part of their origin story. “More than anything, the laid-back getaways forced us to step out of our hectic corporate lives and slow down.”
The two wave-catchers and avid rum sippers attended Rum University (yes, it’s a real place) and learned, amongst major distillers, what a good glass consists of. With this knowledge and a lot of taste testing, the two were able to source distilled, high-quality aged rum in order to finish re-aging, re-proofing, and perfecting the product here on the Island. With the elegance of the French glass bottles and Italian cork caps, the amber spirit sits pretty inside. However, the secret is only for your taste buds to experience.
It doesn’t all end at the bottom of the glass. “Drinking for a Purpose” – the Texas Sealife Center on North Padre Island completes the message of the bottle. It’s the local guys, local companies, and the local momentum that allows Vida Caña to partner up with the Texas Sealife Center to fund rehabilitation and preservation efforts. Participating restaurants like Scuttlebutts and The Gold Fish, among others, will even donate a dollar from every Vida Caña Rum drink to the cause.
The natural Coastal Bend area can be a beautiful destination for a quick little vacay – even if you already live here. With a taste of what these two surfer dudes brought back with them to the Coastal Bend, and in to our shot glasses and mixed drinks, the official vibe of our summer rests on the concept of the “spirit of slow.”
Share