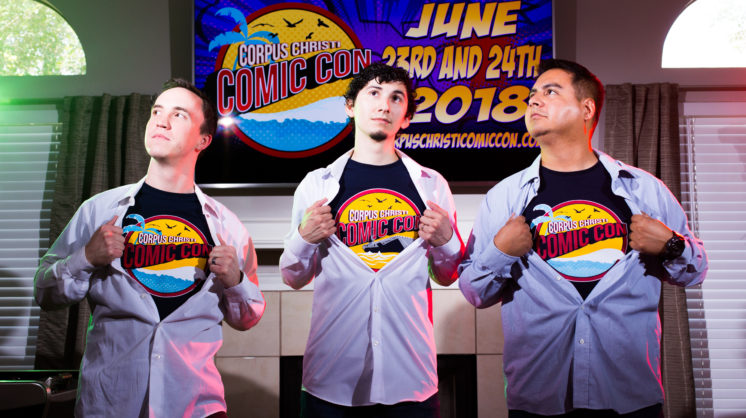 Put the Bat-Signal in the sky! Unite the Justice League! Pokémon trainers commence! All of your favorite characters will be at the Richard M. Borchard Regional Fairgrounds for the Corpus Christi Comic Con. The convention is the brainchild of South Texas native Daniel Benavides, who founded it in 2016.

“I love the Corpus Christi area. I’ve lived here my entire life.” Benavides says. “One weekend, I was at a local toy and comic show with my family. I told my wife, ‘I can’t believe there hasn’t been an actual Corpus Christi Comic Con.’ And then I asked her what she thought about me starting it.”

And just like so many beloved characters, he set out to do something great. As it turned out, this mere mortal’s superpower brings superheroes to life. Benavides brought on two co-owners, John Garcia and Ryan Romel and together, along with their wives and a small staff, they put on the first comic con in 2017. Their first year saw more than 7,000 attendees. This year, they believe it will be even bigger.

“It feels amazing knowing that people are now marking their calendars. Not only those from Corpus Christi – people from all over Texas and outside Texas. It’s making a mark in the Comic Con world. I’m very proud of that,” says Benavides. As Spiderman’s Uncle Ben says, ‘with great power comes great responsibility.’ Which is why Benavides and his team are focused on excellence. “We want this to be as big as possible, but we also want to make a high-quality show that people want to go to.”

There’s no doubt they are fulfilling both of those objectives, when the long list of attractions at this year’s Corpus Christi Comic Con is considered. The weekend is packed with celebrity guests, exhibits, photo-ops, shopping, food trucks, children’s areas, events, and more.

There are also several panels scheduled for the weekend. Each panel features members of a production, from actors to artists, who will be talking about their craft, how they got started, and details about their work. There will also be interviews with celebrities, voice actors, and comic book artists.

“I love to see how people soak up the information,” Benavides goes on. “And they get to interact and meet their favorite celebrities and get autographs and photos. It’s a wondrous thing.”

The Corpus Christi Comic Con will be a great time to break out your Sailor Moon or Iron Man costume, because there will also be cosplay costume contests for kids and adults.

“From anime to gaming to comics and everything else in between,” lists Benavides, “there will be everything pop culture related. We try to offer something for everyone.”

There’s also a ticket package for everyone, including Saturday, Sunday, weekend, or V.I.P. passes. Follow your Spidey-senses to The Corpus Christi Comic Con at Richard M. Borchard Regional Fairgrounds on Saturday, June 23 and Sunday, June 24.

Avengers Assemble! And the rest of the Coastal Bend, you should come, too!