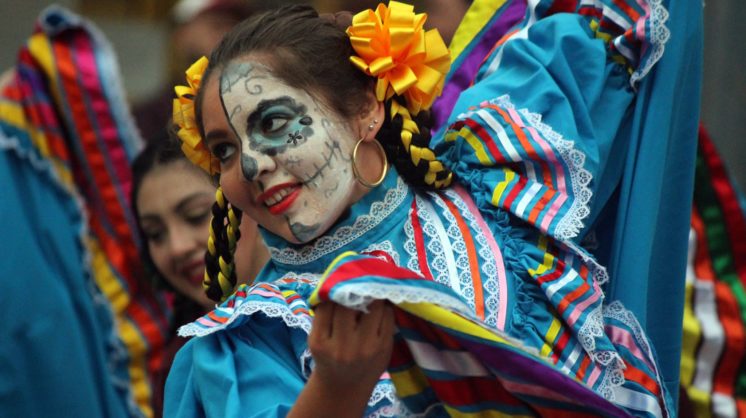 After a two-year hiatus, the Coastal Bend community is excited to welcome back the Dia de los Muertos Festival to celebrate and honor the rich cultural heritage of Mexico and South Texas. The festival will take place Saturday, October 29th from 3 p.m. to midnight all around Chaparral, Starr, Mesquite, Taylor and Peoples Streets.

Dia de los Muertos translates to “Day of the Dead” and is a traditional Mexican Holiday meant to honor, remember and celebrate those who have passed on. Despite the solemn nature of this holiday, it pays tribute to ancestors in a beautiful and joyous way, honoring their legacies with Ofrenda displays and artistic celebrations alike.

The festival originated in Corpus Christi in 2008 when KSpace Contemporary and Axis Tattoo decided to throw a block party to celebrate. Since then, it has taken over downtown with three stages for Latin-influenced music, Mariachis, Ballet Folklorico, an Hecho a Mano Art Expo, a Kids Corner with a petting zoo, 25 different food and drink vendors and more.

Now in its 15th year, the Dia de los Muertos Festival has become one of Corpus Christi’s most popular events. It has been nationally recognized as a top Dia de los Muertos Celebration both in the United States and Texas and voted Best Festival in The Local’s List peoples’ choice awards six years running (2016-2022).

“It’s a great moment for the community to celebrate but to also provide activities to people from all walks of life. It’s a great downtown event as we try to involve our downtown neighbors as much as we can” says Nichole Schiller, The Education and Artist Coordinator at KSpace Contemporary.

In addition to the returning activities, the festival will include a few new additions. Local artists, Myra Zamora and Monica Marie Garcia have collaborated to craft a large photo background featuring “a colorful and bright display that will become an iconic part of the festival” says Schiller. Del Mar College is providing a maze for the kids corner that will be new this year. The expansion of the VIP area with specially catered food, merchandise from local businesses and a premier view of the main stage will be new this year as well.

Perhaps one of the most special and anticipated features of the festival is the return of the Walk of Remembrance Ofrenda Display at The Ritz Theatre. Volunteers at the theatre will place family photos from the community in a beautiful walkable display that honors and celebrates their legacy. The display will run during the festival, and into the official holiday on November 1 and 2, as well as during November’s ArtWalk on November 4.

The festival will be a jam-packed day filled with activities for the whole family to enjoy. For VIP ticket purchases, a map of the festival and a full lineup of artists, visit the website. You won’t want to miss the return of this special celebration.